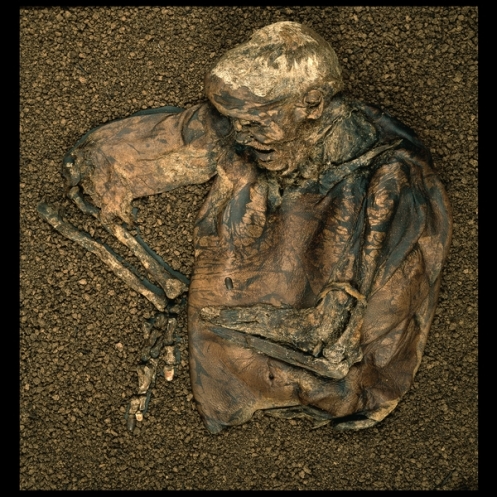 Lindow man died a brutal and horrific death. His body was discovered in 1984, when workmen were cutting peat at Lindow Moss bog in north west England. Lindow man is preserved complete with his skin, hair, and many of his internal organs. This is because of the extraordinary conditions in a peat bog. There is no oxygen in peat bogs, which means that the bacteria that causes decay, cannot thrive.

Lindow man died aged about 25 years old between 2BC and AD119. He was hit twice on the head with a heavy object, possibly an axe. Then he was kicked in the back, which broke one of his ribs. Then a thin cord was tied around his neck to strangle him and break his neck. Even after he died, his throat was cut. He was then thrown face down into a pool in the bog. It was almost certainly a ritual killing.

Perhaps he was a fierce criminal, or it could have been a human sacrifice. This Iron Age man was not a manual labourer, as his hands are well manicured. His stomach contents were analysed to reveal that his last meal was bread made from wheat and barley, and he also suffered from parasitic worms.  During the Iron Age people sacrificed objects such as weapons and cauldrons by throwing them into rivers, lakes or bogs. Perhaps water was an important doorway to the spirit world. Was Lindow man also a sacrifice to the Gods?